World War III is slow-rolling right before our very eyes. Bit by bit, we are drawing closer to a Biblical conflagration that sounds a lot like the End Times and it’s all because we have a senile fool in the White House. Is Joe the Antichrist? 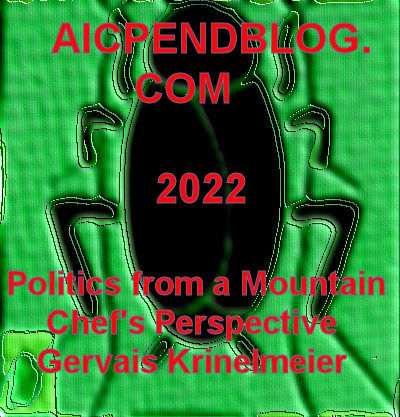 POLITICS FROM A MOUNTAIN CHEF’S PERSPECTIVE

WE SUPPORT THE CANADIAN AND AMERICAN TRUCKERS AND THEIR FIGHT FOR FREEDOM!

World War III is slow-rolling right before our very eyes.  Bit by bit, we are drawing closer to a Biblical conflagration that sounds a lot like the End Times and it’s all because we have a senile fool in the White House.  Is Joe the Antichrist?

The above icon is the “Trademark of Quality and Symbol of Integrity/Logo” of the Magnolia Hilltop Brewers and of What’s Cookin’ Productions.    The AICP-END Blog copyrights this article © 02-24-2022, all rights reserved.  Note: we pay the estate of Beverly Carrick an annual fee by which, we can show her paintings to the world.  We make NO money from the estate’s sales of her world-famous artworks.  Total Word Count: 2,572.  Chef Gervais Krinkelmeier.

Our personal identity and security are now very important so I, like everyone else at the American Institute of Culinary Politics-Elemental News of the Day has had local Bakersfield, California, up-and-coming street artist, Simone, create some portraits of me. The problem is in this hyper age of partisanship and the far left going bonkers, we have had to cut back on how much of ourselves we share with the readership. Sad to say, it sucks especially for someone such as me who lives in a small community and owns a business. I have been in professional foodservice for a long, long time and have known Stinkbug for an equally long time. My name is pronounced KRONK-L-MYER but everyone calls me "The Krink." Gervais writes from Frazier Park, CA. Gervais is a member of the Libertarian Party. Contact me: chefgervaisGE3130@gmail.com View all posts by Chef Gervais "The Krink" Krinkelmeier