Speaking of protests, another good-sized crowd showed up in front of the Joestapo D.C. headquarters where more than 500 Capitol Hill protesters are still being held and abused. For whatever reason, the D.C. Joestapo is trying to crush out the spirits of American patriots by abusing and mistreating these people who six months after the ‘incident’ are still being denied bail. 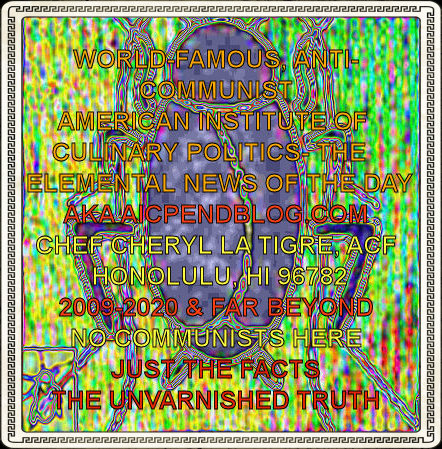 DAY ONE-HUNDRED-AND-EIGHTY-EIGHT OF THE BIDEN REGIME

Tomorrow is the BIG DAY- Nancy Pelosi’s Stalinist Show Trial begins which is why the Joestapo is torturing Trump supporters in the D.C. prison gulag

The above icon is the “Trademark of Quality and Symbol of Integrity/Logo” of the Magnolia Hilltop Brewers and of What’s Cookin’ Productions.    The AICP-END Blog copyrights this article © 07-26-2021, all rights reserved.  Total Word Count: 3,117. Chef Cheryl La Tigre.

[xii] Mayor Rudy also pointed out the very evident fact that slobbering Joe Biden needs to be committed to a nursing home.

I began my career in the early 1970’s when I apprenticed to cook under one of the masters on the Big Island where I was born. I moved to Oahu in the early 1980’s after having worked in both Kona and Hilo, HI, and have been there for most of my professional career. Moreover, I have also worked on Maui for a few years (1995-1998) and have been on Kauai (2001-2003) before returning to Honolulu. My goal is to prepare the next generation of chefs for the future and to help the underprivileged in their struggle to attain careers in the foodservice industry. Chef Cheryl La Tigre writes from Honolulu, HI. Chef Cheryl La Tigre is a proud member of the Democratic Party. Contact me at the following address: cherylthetiger81@gmail.com View all posts by Chef Cheryl La Tigre, CEC-ACF