The American Institute of Culinary Politics-the Elemental News of the Day has said since the inception of this blog back in 2009 that the numbers back then were around 35-50 million illegals whereas now, we believe a much more honest number is between 75-100 million illegal aliens. 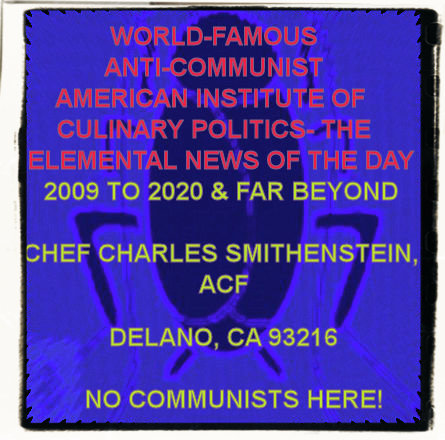 DAY ONE-HUNDRED-AND-EIGHTY-FOUR OF THE BIDEN REGIME

With Larry Elder on the recall ballot in September, it’s a slam dunk that Governor Gavin “The Nazi” Newsom is living ‘on borrowed time’ unless, of course, the Chi-Coms rush out yet another Chi-Vi variant in time to cause another lockdown…

The above icon is the “Trademark of Quality and Symbol of Integrity/Logo” of the Magnolia Hilltop Brewers and of What’s Cookin’ Productions.    The AICP-END Blog copyrights this article © 07-22-2021, all rights reserved.  Total Word Count: 2,900. Chef Charles Smithenstein.