Meanwhile, as we predicted a couple of days back, the Chi-Coms are looking to expand their reach into the war-torn, barbaric nation. We expect the Russians, the Chi-Coms, and the Iranians may carve out enclaves in which, they can rape the hellhole of whatever resources exist there like, uh, opium, the Chi-Coms can then sell to narcoterrorists and drug-traffickers for export to the U.S. 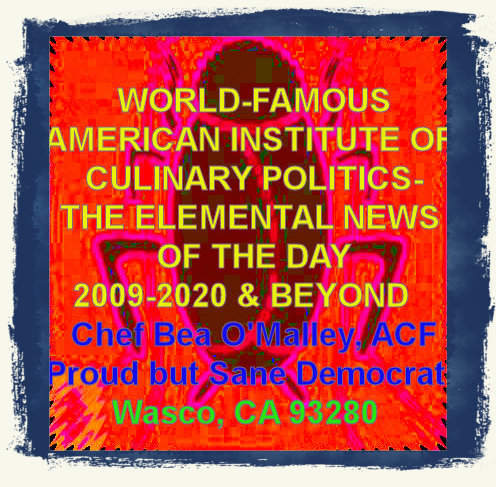 DAY ONE-HUNDRED-AND-SIXTY-EIGHT OF THE BIDEN REGIME

All it takes to get banned from Twitter is to make fun of the BIG Chi-Com authoritarian thug Xi Jinping- this POS has more in common with Adolf Hitler than Mao Zedong- he’s a NAZI!

The above icon is the “Trademark of Quality and Symbol of Integrity/Logo” of the Magnolia Hilltop Brewers and of What’s Cookin’ Productions.    The AICP-END Blog copyrights this article © 07-06-2021, all rights reserved.  Total Word Count: 2,814. Chef Bea O’Malley.

This is a cartoon caricature of me when I was working at a restaurant in Wasco, CA, my hometown. The up-and-coming Bakersfield, California, street artist Simone did portraits of each of us here at the blog so I hope you like them as much as I, ahem, do. The important thing for us as foodservice business owners is that we protect our identities because in the age of the Cancel Culture, IF Marxist punks leads boycotts against us, it can destroy businesses that have been around for years, if not decades. Ah, well, I joined the Chefs de Cuisine of Greater Bakersfield, ACF, not long after it was chartered and am still a member even though the chapter is no longer in operation. I began working in foodservice in the late 1960’s, moved from Wasco, CA, to Monterey, CA, and then returned to my hometown in 2004. I have been a foodserver, a Mixologist, and am a Certified Cook. I am equally at home in both the kitchen and behind the bar (and on the floor, too). My passions are numerous, and my favorite is working in the bakery whenever I have had a chance. Bea O’Malley writes from her hometown of Wasco, California Bea O’Malley is a proud member of the Democratic Party. View all posts by Chef Bea O'Malley, CWC-ACF, Mixologist, and Professional Foodserver

2 thoughts on “All it takes to get banned from Twitter is to make fun of the BIG Chi-Com authoritarian thug Xi Jinping- this POS has more in common with Adolf Hitler than Mao Zedong- he’s a NAZI!”