You see, First Amendment rights are important, which is why everyone at the American Institute of Culinary Politics-The Elemental News of the Day publishes what political party we belong as well as to our political leanings so everything is out in the open. It is important that everyone know where everyone else emanates so we can punish propagandists seeking the downfall of a duly elected president and worse, who do the bidding of communist China.

JUST THE FACTS AT THE AICPENDBLOG.COM

THE AMERICAN INSTITUTE OF CULINARY POLITICS-ELEMENTAL NEWS OF THE DAY COMMENTARY-OPINION-SPORTS-FOOD SERVICE FOR THURSDAY, MAY 14, 2020 BY CHEF MOSES SCHARBUG III

“Barack Obama need not fret about his crumbling legacy; the history books are going disparage him forever as the first president ever to launch a coup against a successor” by Honorary Chef Moses Scharbug III

Communist China is a danger to us all but so is the Obama Gang, which is why we hammer them first…

Oildale, CA 93308, 05-14-2020 Thursday: We have much to discuss about communist China, a nation my colleagues and I have decided to note as the ersatz China, seeing as how they have both a communist government and a brand-new dictator for life, Xi Jinping. We also believe that we must refer to Taiwan as what that nation truly is- Nationalist or the Republic of China, the genuine China, the free China, which means the nation should have its seat restored in both the United Nations and on the Security Council. We must either return to the era of the Two-China Policy by which, we recognize BOTH Chinas (if we must), the genuine China and the counterfeit one, the one presently holding power in Beijing[i]. Coronavirus has given us this amazing once-in-a-lifetime opportunity to right a tremendous, historic wrong[ii].

First, we must conclude the theme of yesterday’s post, the one in which, we were discussing how the Obama Gang set out to destroy Donald Trump, both as the nominee of the Republican Party and then as the president-elect and finally as president. All because Obama hates the man’s guts. Shame on him. Shame on his underlings and his hirelings, losers who provided him with the necessary support to commit this ghastly travesty against not only President Trump but against the American people and their Constitution.

I am glad the truth is finally beginning to come out so thank you acting DNI Rick Grenell. Barack Hussein Obama since leaving office has been afraid for his disappearing legacy. Like the old movie, “The Incredible Shrinking Man[iii],” so, too, does Obama’s time in office continue disappearing.

I should tell him, however, that he has no need to fear because history books around the world will remember him in perpetuity for the scoundrel he is. The instigator of America’s first attempted political COUP against a fellow president.

Back to the 45th president, the mistake President Trump made prior to assuming office (and then once on the job) is that the man was a political novice[iv]. He knew he was entering a snake pit but he had no clue as to how deep it was or how many snakes populated it.  Sort of like in “Vikings[v]” when the infuriated Brits dropped Ragnar Lothbrok into the serpent pit.

Moreover, he had no clue as to whom he could put around him to (1) do the job honestly and efficiently and (2) even more importantly, who would NOT work against him but for or with him. It took quite a while to weed out many of the slime balls seeking to subvert him and sadly, many more remain and need exposing and removal- like the crybaby[vi] sniveling that ‘Trump didn’t listen to him about the Wuhan Virus.’ Wah-wah-wah.

By the time the world knows the truth, millions of people will be shocked, especially those who tune into the news on an irregular basis or those who lap up the yuck spewed out of the rear-ends of CNN, MSNBC, ABC, CBS, and NBC miscreants.

All of these so-called ‘news professionals’ are part of the cabal of Deep State agents and bought-and-paid-for Chinese assets who have sought to overthrow our form of government and to right ‘wrongs’ such as Hillary losing a sure-thing election in 2016 and members of the Obama Gang from getting plump posts in Madam Clinton’s administration.

These very same rascals and rogues all dance to the Mandarin jig played in Beijing. They would rather be princes in Hell than commoners on Earth, much less angelic presences in the light of Yahweh. This is why these rapscallions defend communist China and bemoan everything the Trump administration is doing and has done to protect us which is why when this close to an end, we will have to put these sons and daughters of female dogs in heat on trial, too.

You see, First Amendment rights are important, which is why everyone at the American Institute of Culinary Politics-The Elemental News of the Day publishes what political party we belong as well as to our political leanings so everything is out in the open. It is important that everyone know where everyone else emanates so we can punish propagandists seeking the downfall of a duly elected president and worse, who do the bidding of communist China.

Join me tomorrow, my friends, we have much more to thrash out.

Assistant Editor of the Elemental News of the Day

I spent my life as a university professor and then as an administrator at one of California’s State Universities in the Southland back in the 1970’s through the 1990s. I’ve been retired for the past 24 years and have been the assistant editor of the END since its first incarnation at Choseit.com back in 2009. A citizen of both the United States and now of my adopted homeland, Israel, my wife, and I look forward to retiring in Tel Aviv most likely in 2021.

Moses Scharbug III is a proud member of the Republican Party.

05-14-2020 Thursday—Political Topics and Essays, Part MMCLIX: “Barack Obama need not fret about his crumbling legacy; the history books are going disparage him forever as the first president ever to launch a coup against a successor” by Honorary Chef Moses Scharbug III.

HOW TO CONTACT THE AMERICAN INSTITUTE OF CULINARY POLITICS-ELEMENTAL NEWS OF THE DAY: Write us at PO Box 20669, Bakersfield, CA 93390-0669 or call us at (661) 374-1430 between the hours of 8:00 a.m. and 8:00 p.m. PST weekdays and weekends, well, take your chances. You can also email us by contacting the author of the week using his or her email address, which we provide beneath their personal information.

The above icon is the “Trademark of Quality and Symbol of Integrity/Logo” of the Magnolia Hilltop Brewers and of What’s Cookin’ Productions. The AICP-END Blog copyrights this article © 05-12-2020, all rights reserved.

Scharbug III, Moses. “Barack Obama need not fret about his crumbling legacy; the history books are going disparage him forever as the first president ever to launch a coup against a successor.” Political Topics and Essays, Part MMCLIX

BEVERLY CARRICK PAINTING OF THE DAY:

This artwork is #1267 an 8” x 10” original oil painting by Beverly Carrick, which, she entitled, “Soft Light.” It is among her more beautiful works and is available for sale. You can see much more of her work at her Website, found at beverlycarrick.com, or at the blog’s Facebook page. At her Website, you will see not only more original oil paintings but also lithographs, giclees, prints, miniatures, photographs, and even her award-winning instructional video entitled, “Painting the Southwest with Beverly Carrick.” Beverly has been painting for more than 60 years and known around the world for both the beauty and timelessness of her artworks. Hanging in private and public galleries and followed by many fans encircling the globe—her works instill awe because of her artistic brilliance and personal beauty. We urge you to go to her Website NOW and view her work. It is possible that you will find something you like and will want to buy it for yourself, a friend, a loved one, or a neighbor! You will not be disappointed so please: do yourself a favor and go there IMMEDIATELY! Thank you, the American Institute of Culinary Politics-Elemental News of the Day! 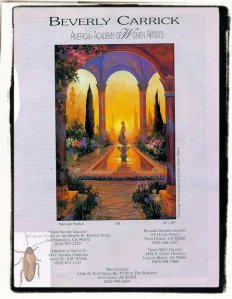 KEEP READING THE ELEMENTARY NEWS OF THE DAY FOR THE BEST OF CULINARY POLITICS!

READ THE ELEMENTAL NEWS OF THE DAY FOR THE BEST NEWS, POLITICAL COMMENTARY, SPORTS, FOOD SERVICE, HOTEL, AND RESTAURANT BUSINESS, THE END TIMES, THE END OF DAYS, THE APOCALYPSE, ARMAGEDDON, AND WHATEVER ELSE HAPPENS TO POP UP!

[i] No matter what communist China does, the fact that it is built atop lies, atop theft, and atop dreams of world domination as well as the fact that it’s communist means it will one day implode, even if its dreams come true. Freedom always wins and although the communists can stamp it out wherever it might arise, they cannot stamp it out forever. Take note, People’s Republic of China. FREE Hong Kong! FREE Taiwan! Free Tibet! Free them all!

[ii] Among countless others such as saying, “To hell with globalism,” as well as restoring the supply chain back to the United States and depriving these godless communist heathens of both jobs and the wealth of free nations. Time to bring every last U.S. business located overseas home and Trump is the man to do it.

[iii] Universal Pictures, 1957. It starred a cast of relative unknowns but is a sci-fi classic to this day.

[iv] But not now. By the time he leaves office, he will be one of the toughest survivors of the office and all future political outsiders will surely come to him, either in person or to the books he will author, to soak up the lessons he had to learn on the fly.

[v] Season 4, I believe, is when the Northumbrians sent Ragnar to Valhalla.

[vi] Fired CDC ‘whistleblower’ Dr. Rick Bright says, “Trump didn’t listen to me.” Oh, boohoo, Trump has done far more to protect the American people than the phony #44 ever would have or did.

WE THANK EVERYONE FOR JOINING US AT WORDPRESS.COM AND FOR AIDING US IN CONTINUING TO DO THE WORK WE TOOK UPON OURSELVES MORE THAN A DECADE AGO. ALTHOUGH WE ALL WRITE WITH PEN NAMES TO PROTECT OUR BUSINESSES, WE SHARE THE TRUTH AS WE SEE IT AND PULL NO PUNCHES WHICH IS REASON ENOUGH TO JOIN US DAILY!

I was a university professor at one of California’s State Universities in the south land back in the 1970’s. I’ve been retired for the past 16 years and have been the assistant editor of the American Institute of Culinary Politics-Elemental News of the Day since its first incarnation back in 2009. My wife and I have retired to Israel and we live in the Ramat, Hasharon, Tel Aviv District. We hold dual citizenship and plan on spending at least one month per year in our home in Oildale, California. View all posts by Honorary Chef Moses Scharbug III Ph. D.

The Jefferson Airplane- “The Woodstock Experience”

Top Tags at the AICPENDBLOG.COM